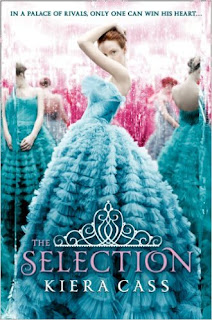 Review
In a palace of rivals, only one can win his heart...

The Selection is a book about 35 girls who will enter the selection to be the wife of prince Maxon. They all get this oppurtunity to become something more than they are, to be a one. Those 35 girls are from different castes (one until eight), and America Singer is one of the only girls from 5, and she is our protagonist.

America is a girl in love with Aspen, a guy who is a caste below her, but she doesn't care about that. She loves him unconditionally and she even breaks the rules for him. Everything was fine between them until the selection showed up. America's mother wanted that she entered it, but she did not. She had Aspen and that was all she needed. But Aspen also said she had to enter, so she thought about it. Her mother even sugested she could keep half of the money she earned by singing or playing an instrument and that's when she knew she had to enter. She could save money for her and Aspen and everything would be fine at the end because she wasn't going to be eleceted for the selection.
She saved money and made a dinner for Aspen, she thought he would be so happy, but he wasn't. He knew he could never give that to her, so he broke up with her... And then on the tv her face showed up, she was elected, she was going to be on the selection. 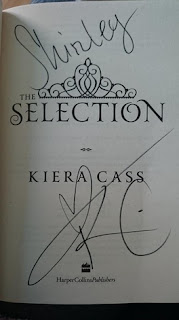 Her heart was broken and when she met prince Maxon she knew she could never love him if Aspen was on her mind. But in the time she spent in the palace, she made some friends, some enemies, and she got a little homesick. But then there was Maxon, the one she could laugh with, the one she could tell everything to. They became friends. And the more she got involved with him, the more she cared about him, and she even started to like him. And she could fall in love with him, if Aspen didn't show up as a guard. It's a difficult choice for her, Aspen or Maxon? The guy she knew for so long, but broke her heart or the guy she met not so long ago, but fixed her heart (a bit)? Who is she going to choose?

A while ago I read this sampler where there were a few chapters of The Selection and it made me
wanted to read the book. But I forgot a little about the book and never bought it until there was a book event 1,5 week ago. Kiera Cass was going to talk about The Selection, you had the oppurtunity to go on the picture with her and get your book signed. I immediately bought the book and listened to her. I was so intereseted and she was so funny, I couldn't wait to read the book. And I loved it. It's such a good book!

At first I heard a lot of bad things about America herself, that she was so annoying and irritating, but I actually liked her. It's special that she's a five and enters the selection at the same time, and even more special that Maxon likes her. I love good dystopian books, and this is one of favourites! 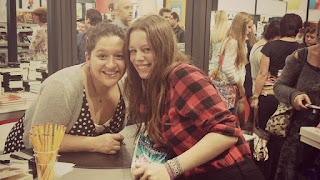