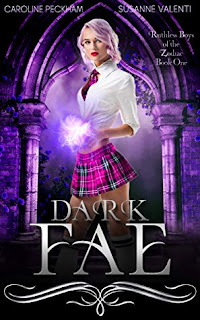 What do a heartless Dragon Shifter, a cold-blooded Basilisk, an arrogant Lion Shifter and a brooding, tattooed Harpie have in common…?
Me.

Elise Callisto. Vampire. Badass. And a girl on a mission to destroy one of them for murdering my brother. I just don’t know which one did it yet.

When I kicked the ass of a Werewolf who was high on a new and dangerous drug called Killblaze, his final words painted a dark reality for me. The King of Aurora Academy killed my brother. The trouble is, there’s four kings at that school and each of them have motive and cutthroat natures.

Aurora Academy isn’t a place for the faint of heart. To put it lightly, my town is the asshole of Solaria where the dodgiest Fae in the kingdom reside. The school itself is divided by the two gangs who run this town. The Lunar Brotherhood and the Oscura Clan. And guess what? Two of the kings run the gangs at the school, their hatred for each other so fierce I hear a day doesn’t go by without blood being spilled in the halls.

I might be a petite, lilac-haired girl who looks like a fragile doll, but they haven’t been introduced to my fangs yet. And they don’t know why I’m really here. Or that I’ll do whatever it takes to bring down the Fae who took my flesh and blood from me.

I don’t believe in fate, but I do know this … the King who killed my brother is a dead man walking. And I’m prepared to sacrifice my heart, body and soul to ensure I get my revenge.

This is a reverse harem series set in the world of Zodiac Academy four years before the Vega Twins were Awakened. Expect some character cross-over, dark and hot romance, and a twisted murder mystery which will leave your head spinning.

A spin-off series of Supernatural Beasts and Bullies? SIGN ME UP! Dark Fae was such a fast-paced and well-written book, wow! I couldn’t stop reading the entire time because I wanted to know what was going to happen to Elise and what really happened to Gareth.

Elise is such an amazing and badass character. I love her personality and how she acts when the four Kings are around. Speaking of these Kings, I don’t really have a favourite yet. I do know that I have some mixed feelings about Ryder since he’s a bit weird. No spoilers but there’s a certain scene with Gabriel that I cannot get out of my head!

I really loved Dark Fae because it was just such an amazing book and I loved Caroline Peckham and Susanne Valenti’s take on the Reverse Harem genre. And I’m kinda angry at the ending of Dark Fae, so I need the sequel NOW, thank you.