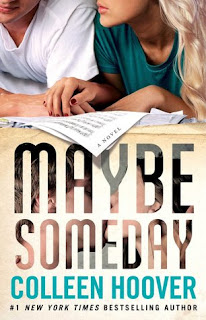 Review
There are only twenty-six letters in the English alphabet. You would think there would only be so much you could do with twenty-six letters. You would think there were only so many ways those letters could make you feel when mixed up and shoved together to make words.
Maybe Someday is a book about Sydney and Ridge. Sydney loves sitting on her balcony listening to a guy who plays guitar. One day he notices that Sydney was singing while he was playing and that’s how it all started.  They started texting and becoming friends. One day Ridge texted Sydney to tell her that her boyfriend is cheating on her with her best friend/ roommate. She becomes ‘homeless’ like she calls it and Ridge takes her in. Up close Ridge even looks better but then there’s the huge plot twist: Ridge is deaf.
They started making music together, he’s playing the guitar and she’s writing and singing the lyrics. And that’s how they start to fall for each other but there’s one problem: Ridge has a girlfriend, Maggie.
Sydney is such an amazing character. I love her personality and her passion for music. And Ridge, oh God, where do I begin? I just LOVE him. The fact that he’s deaf and still plays guitar is so beautiful. And he has such a hard youth with his parents and taking care of his little brother. One thing that I thought was so beautiful was the fact that he hasn’t spoken since he was 9 years old but for Sydney he spoke. Even long sentences and that really shows how much he loves her.
It’s crazy how being held by someone for just a few minutes can forever change how it feels not to be held by him. The second he releases his hold on you, it suddenly feels as if a part of you is missing.
Maybe Someday is such a heart-breaking story. I cried, like a lot. But there were also times when I was smiling or laughing out loud. I love that there’s this app so you can listen to all the songs you can read in the book, it makes the book even better. I wish that I could re-read it again without knowing the ending, because I love the book so much. Colleen Hoover made me fall in love with her characters again and I cannot wait to read another book by her.