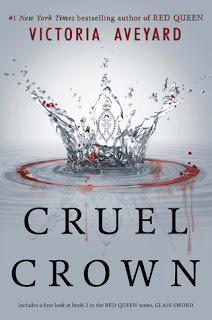 Review
Cruel Crown contains two short stories: Queen Song and Steel Scars. Both short stories are set before Red Queen and give us a better look on the characters and the Scarlet Guard. You can also read a sampler from Glass Sword, but I don't like to read a sampler and then wait until I have the book, so I didn't read the sampler.

Steel Scars
Steel Scars is the second short story. It tells the story of Captain Farley (Diana). You get to know more about the Scarlet Guard, how it works and how Mare's brother, Shade, got involved. You get to know that Mare isn't the

I think that both short stories are really amazing. You get to know more, information you didn't know by reading Red Queen. There were even times that I was shocked (for example with Shade). These stories gave me a better look and I can't wait to read Glass Sword.