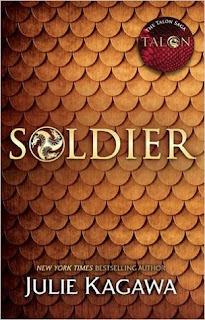 Soldier is the third book in the Talon series and it continues the story of Ember and her friends Riley, Wes and Garret.
When Garret saw the Patriarch from St. George and someone from Talon talking, he knew something was wrong. At the same moment he meets an Eastern dragon, Jade. Garret has to go back to Ember to tell what he saw and he's determined to stop Talon and St. George.

Soldier is an amazing sequel with a lot of plot twists. Like always, Julie Kagawa's writing is amazing and I loved the multiple perspective. You get to know a lot about the characters, there true feelings. Most of the time you know what the protagonist is feeling, in this case Ember, and that's it but in this series you get to know so much more. You get to know Riley's feelings and Garret's feelings. You know how both of the guys feels and not only how the girl feels. In Soldier you also get to know more about Garret's past. Those parts were really interesting. The only point of view I think is kinda boring, is Dante's. Okay, I get that you need to know some things about him too, but I don't think it's that important though.

There are a lot of plot twists and I didn't see them coming. For example in the epilogue you read that Dante (so also Ember) is the son of the Elder Wyrm. I was really shocked when I read that. Another thing I want to say is that Julie Kagawa is evil. The way she ended Soldier is so evil, letting us read that Garret's dead... Even though he probably won't be dead, I still had tears in my eyes!

I cannot wait to read Legion, so Julie Kagawa you better finish that book so I can read it!