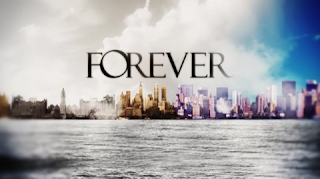 Forever is a TV show about Henry Morgan who seems to be a normal man and is a medical examiner for living. But our eyes fool ourselves. Henry Morgan is actually an immortal and helps with his knowledge of all those years he's lived to help the NYPD.

I love supernatural things, so a TV show about an immortal is always interesting for me. To be honest I didn't know this show existed until my mum told me about it, she loves TV shows like that too.

I really liked watching Forever. I like TV shows about fighting crime and great characters. Henry Morgan is such a witty person and I like the facts he knows and the way he is. And when he gets a new clue in a case, it's always so nice to watch, Henry's always so happy.

I think the ending was really open. At one point, I think the TV show ended really well because they figured out the truth about Abigail but at the same time I think I wanted to know how Jo would've reacted to the truth and how she would've acted knowing who he really was.
I'm also kinda sad that it was the end of Forever. I wouldn't mind another season!