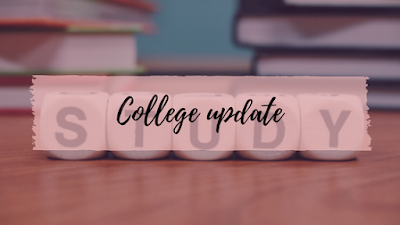 Hi guys! It's been awhile since I've written another college update so here we go!

So in the beginning of January until the end of January I had 8 exams. But 1 of my exams is not graded yet because it's a part of the second semester exam and my oral exam and written exam of French are 1 grade. Some of them were difficult, some of them weren't. For those interested, here are my grades:

I knew I'd have bad grades for French and Translating Techniques and Tools so I'm not that disappointed. It's also my first year of college so everything is new for me.

At the moment I'm having a break so I can relax a bit, read more books and watch some TV series. But to be honest, it's not really a break. I have a lot to do and I want to start my exercises of French already. If you can see my grade for French, you can get why I already want to start on them. In the first semester of school I didn't do all my exercises and that's the main reason why my grades are so low. I know I should've made them but it takes so long to score 4x minimum an 8. It's really hard but in the end I know it'll pay off. So that's why I'm already starting!

I'm looking forward to starting the second semester because we're going to spend a day at a French college, Helha, and the next day the students of Helha are coming to our school. When we go to the French school, we must talk French and when they come to our school, we must talk Dutch. It's a way to make our French and their Dutch better. I think it's an amazing idea and I'm so excited! We all got a correspondent during the first semester and mine's called Laura. I really like Laura, she's so nice and really helps me with my French. When we're chatting via Facebook, I send my texts in French and she sends her texts in Dutch. When I make a mistake, she corrects mine and vice versa.

I think this is it for today's college update. I don't really know what's going to happen in the second semester yet, but when I know more I'll definitely update you guys!