The Sun Is Also A Star | Review 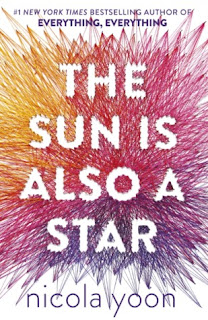 People spend their whole lives looking for love. Poems and songs and entire novels are written about it. But how can you trust something that can end as suddenly as it begins?

The Sun Is Also A Star tells the story of Natasha and Daniel. Natasha is an African American girl who loves science and facts but doesn't believe in love and fate. Today is the last day for her in America because she's being deported to Jamaica.
Daniel is a Korean American and is a poet. He strongly believes in fate and he believes that he and Natasha are meant to be. But are they?

He was some exotic planet and I was his favorite satellite. But he's no planet, just the final fading light of an already dead star.

Natasha and Daniel met when Natasha was heading to her last hope to stay in America and Daniel was on his way to an appointment for college. When they met, Daniel immediately felt a connection, but Natasha did not. Daniel tries to persuade her in the last hours Natasha has left in America. Will he succeed?

There's a Japanese phrase that I like: koi no yokan. It doesn't mean love at first sight. It's closer to love at second sight. It's the feeling when you meet someone that  you're going to fall in love with them. Maybe you don't love them right away, but it's inevitable that you will.

I loved reading in the perspective of Natasha and Daniel. It gives you a better look at who they really are. You also had chapters in other perspectives such as Irene, Natasha's dad, Daniel's dad,... But also scientific chapters. I often found them annoying because I only wanted to read in the perspective of Natasha and Daniel. That's the main reason why I gave this book 4 stars instead of 5 stars. I often found those chapters unnecessary and annoying. But sometimes they were interesting and a good add to the story. I was scared that The Sun Is Also A Star was going to end badly, but I'm glad it ended the way it ended.

I made a The Sun Is Also A Star inspired make-up look, click here to check it out!