A Bargain in Silver | Review 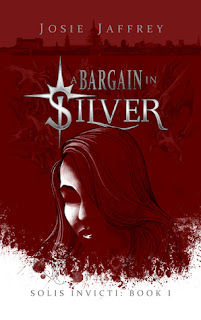 A Bargain in Silver tells the story of Emmy and how her world turned upside down by the Weepers and the Silver. The weepers are deadly vampires, who can turn you into one of them by just biting you. The Silver are more human vampires and they take over London, the city where Emmy lives. The Silver are trying to save the humans from the Weepers, but Emmy doesn’t really believe that, even though the handsome Silver, Drew, tries to change her mind. But that’s not it, the leader, the Primus Solomon, has an interest in Emmy as well… What will Emmy do? Keep living with the Silver? Or will she run away?

I was really excited when I received A Bargain in Silver because I’ve been craving vampire books. I don’t know why, but for the last couple of months, I didn’t read a lot of vampire books. Luckily, that changed!

When I first started reading A Bargain in Silver, I was planning on reading a few chapters and then go to sleep. It was already 11 PM when I started reading, so I didn’t want to read too much because I had to prepare my exams and study for them. Well, that didn’t turn out as planned… I finished A Bargain in Silver around 2:30 PM because I just couldn’t stop reading. I was completely sucked into Emmy’s world and I just had to finish it!

Emmy is such a nice badass character. I love that she doesn’t immediately trust the Silver. She also struggles with her feelings towards Drew and Sol (short for Solomon) and that was another thing that I really liked. I really like reading love triangles if they’re done right and this was exactly what I wanted. And if I have to choose between Drew and Sol, I would pick Drew. Not because of the bond, because I already picked him before I knew more about the bond.