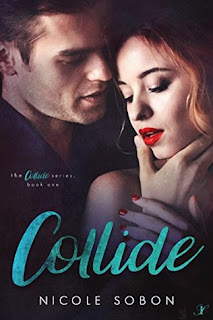 Collide is such a beautiful and short book. I read it in one sitting and I enjoyed every page of it. The story is really fast paced and you can totally relate to it.

Gemma is a very anxious and socially awkward, and I’m totally like her. The book begins with Gemma and Ben going out and Gemma totally doesn’t want to because she’s rather at home with a book and she says that ‘As much as I wanted to be social, being around people tended to make everything worse.’ And that’s so me, so I really loved that I could relate to Gemma.

When I read about Ben, I immediately thought of my boyfriend. Before my boyfriend and I were together, we were best friends and he was in love with another girl. I always hated that other girl even though she didn’t do anything wrong, but I was always a good friend that helped him get the girl. My boyfriend is just like Ben, the one who saved me from my unhappiness, like Ben saved Gemma from her brother’s death.

I really loved Gemma and Ben and I cannot wait to continue this series because of that ending… Give me book 2 already!!!