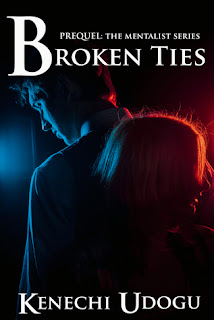 This book was provided by the author in exchange for an honest review. Thank you Kenechi Udogu!

Broken Ties is a prequel in The Mentalist Series about Gemma’s father and mother, Paul and Nora. It’s the story of how they met and fell in love with each other.

Broken Ties was such a cute and lovable novella. I couldn’t stop reading it because it was so well written and I just had to know how Paul and Nora fell for each other. I think that I definitely would’ve read Paul and Nora’s love in a trilogy and then Gemma and Russ’ love in another trilogy!

Broken Ties was yet another amazing book in The Mentalist Series and I’m kinda sad that the series is over now. It was such a good series! I want to thank Kenechi again for giving me review copies because I’m so glad that I finally read the entire series!