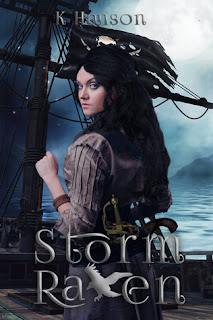 This book was provided by the author in exchange for an honest review. Thank you K. Hansen!

Storm Raven tells the story of a pirate called Nereyda and her crew of the Storm Raven. They attempt on raiding a big ship but get captured by Commander Erhan of the Imperial Navy. Nereyda gets separated from her crew and has to help Erhan with his trip to the Shattered Sea. Her crew has to work in the mines, but Nereyda doesn’t forget them. She does everything so she can rescue her crew.

Storm Raven is only the second book I read about pirates and it was okay. It was an interesting story and I really wanted to know how the story was going to end. I do have to say that it seemed like everything was really easy for the main characters. It seemed like they had to say or do a few things and then immediately got what they wanted.

The characters of Storm Raven were likeable but not that in depth. They were more or less stereotypes and it was a bit obvious how they were going to react. The same goes for the story of the book. It was often a bit hard to get through the book, not only because it was obvious but also because it was somewhat boring. You read in the perspective of Nereyda, Brynja (Nereyda’s first mate) and Erhan. I only enjoyed reading Nereyda’s perspective because Brynja’s and Erhan’s perspective were a bit boring. I do admit that it was nice to know what everyone else was doing, but it was just not that interesting.

Storm Raven was, overall, an okay book for me but I’m still interested in how the story will continue.