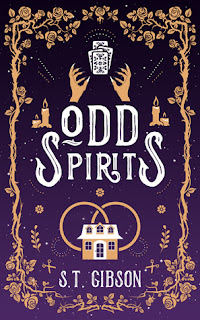 This book was provided by the author in exchange for an honest review. Thank you S.T. Gibson!

Odd Spirits tells the story of Rhys and Moira, a magician and a witch. They’re just living their lives until strange things are happening and they don’t know why. They’re trying to figure out what’s happening, but that means that an old friend of Rhys has to help, and Moira doesn’t really like that friend…

I really liked the characters because they were so real. Rhys is bisexual and Moira is kind of scared that she isn’t enough for him because she cannot give him everything he likes and I think that this is definitely something couples struggle with. And then Rhys is jealous because Moira gets a lot of attention because she’s really sweet to everyone, and that is also something couples struggle with. I really liked that this was discussed in this novella because these are challenges every couple deals with.

Besides the characters, I really liked the story in general. It was such a quick and nice read, with an enjoyable writing style. Odd Spirits is just easy to read when you’re into something short with some romance and fantasy. I really liked the way this story ended and I also wanted to say that I’m so in love with the cover, it’s so beautiful!

Odd Spirits is definitely the perfect read for fall so make sure to grab a copy and enjoy the story!