Lurking in the Woods | Review 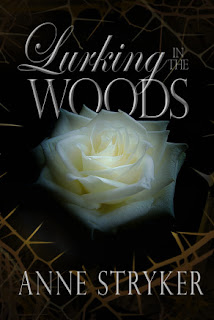 This book was provided by the author in exchange for an honest review. Thank you Anne Stryker!

Lurking in the Woods tells the story of Bryn and Rhyeos. Bryn loves travelling but she quits travelling for a while to check out her grandma’s cabin. She always thought that her grandma’s ramblings about magic were stupid until she meets Rhy.

Lurking in the Woods was such an interesting and original read because Anne Stryker created this whole new world with a lot of fantasy/supernatural creatures such as unicorns, fairies as well as an oracle and a werewolf.

The characters in Lurking in the Woods were interesting as well because you have Bryn and Rhy. Bryn is just human, but she’s definitely more than just human. She sacrifices herself to save a kingdom full of ‘people’ she doesn’t know. Rhy is definitely the most interesting one because you don’t really know him, but at the same time, you can’t stop laughing with him. And then there’s this special thing about him, which is a gigantic spoiler, so I’m not going to tell you, that really fascinated me!

Lurking in the Woods was definitely an amazing fantasy read and I cannot wait to read the sequel!