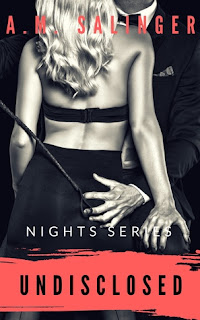 Undisclosed tells the story of Eveline and Lincoln. Eveline discovers she doesn’t own the land where her successful club is situated. She’s determined to get it back, but she didn’t know that a very sexy man named Lincoln owns it now…

I cannot wait to read the other books in the Night Series and I’m really interested in the m/m books since I haven’t read a lot of m/m yet!