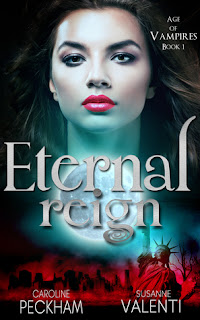 Within the Realms, human life is defined by blood.

But there is a way out: The Testing.

No one knows what happens to those who pass. But rumours of the powerful vampire family who want them spark fear in the chosen few.

When sisters Callie and Montana pass the test, they rebel against their fate and plan to do what no human has ever done.

But the vampires have eyes everywhere and the girls are soon torn apart, sending them spiralling down two dangerous paths.

One to the vampires.

The other to the slayers.

With Callie in the hands of a fierce warrior and Montana trapped in a terrifying ritual run by the royal vampires, can they find their way back to each other before it's too late?

Or will their fates be decided by the deadly men who shadow them..?

Eternal Reign is the first book in Age of Vampires series and tells the story of the twin-sisters Callie and Montana.

I’ve read a few books by Caroline Peckham so I had high expectations and she and Susanne Valenti didn’t let me down. Eternal Reign was such a good book set in a Dystopian world about vampires and slayers.

Eternal Reign was really fast paced and I was immediately sucked into the story. I had to know what was going to happen to the characters and how the book was going to end. I think that Callie is my favourite character because I really liked her and I also really liked Magnar. Montana is a lovely character too and I don’t really know what to think of Erik.

Eternal Reign was yet another amazing book by Caroline Peckham, and I cannot wait to read the next book in the series as well as more books by Susanne Valenti!