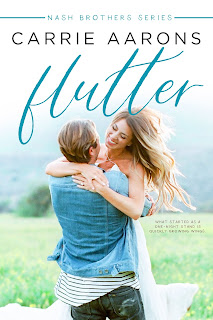 He can’t stand her, and best believe, the feeling is mutual. Her life is the complete opposite of what he desires. So, why can’t they keep their hands off each other?

Flutter is the third book in The Nash Brothers series and tells the story of Forrest and Penelope. Flutter can be read as a standalone, but I still recommend reading Fleeting and Forgiven.

Flutter is so far the best book in this series, it was so hard to put down and I couldn’t get enough of the characters. I really liked Forrest and Penelope! It was also nice to read about the characters from Fleeting and Forgiven, book 1 and 2!

I really liked the double perspective because you got to know both sides of the story. I think that this story was even more interesting than Fleeting and Forgiven because it was kind of a secret relationship/"forbidden’ relationship because Penelope is a few years older than Forrest.

Forrest and Penelope are both amazing characters. They’re made for each other because they’re both funny! Forrest is such a cute nerd and I think I’d fall for him in real life! Penelope is a single mum and she’s so strong!

Flutter was such a quick read and so well written. I cannot wait to read the last book in The Nash Brothers series, Falter!