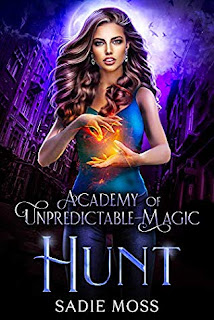 My whole world is on shaky ground.

I’ve only got one more year at Griffin Academy, but it’s a little hard to focus on school after the bomb that was dropped on my personal life.

On top of that, whoever has been targeting Unpredictables is only stepping up their game.

If we don’t find out who it is and stop them, there’ll be no academy left.

No pressure though, right?

Hunt is the fifth book in the Academy of Unpredictable Magic series, a medium-burn reverse harem story intended for ages 18+, featuring a badass chick and the four sexy men who fall in love with her.

Hunt is the fifth book in the Academy of Unpredictable Magic series and continues the story of Elliot and her four men.

Hunt was just like every other book in the Academy of Unpredictable Magic series: AMAZING! I just really love this Paranormal Romance series so much! I think it’s my favourite series by Sadie Moss so far! Hunt was such a fast paced read, I finished it in one day.

Another book in the series, another problem for Elliot. In every book she deals with a few problems such as the chance of closing down the Unpredictables’ school, a demon bird, someone who wants to kill her, … In this book, Elliot and her four men are trying to find out who’s behind all of this. Besides the action, there’s still some romance in this book: the first foursome scene in the series. And let me tell you, it was HOT!

Hunt was such a good book and I’m kind of sad that the next book, Clash, will be the last one in the series. I really love Elliot and her four men, so it’s going to be hard to say goodbye to them!