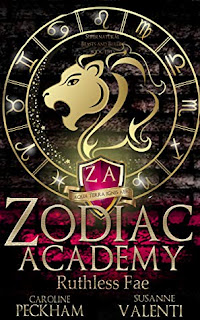 They tried to break us.
They almost did.
But we’re not going anywhere.

The Celestial Heirs think the stars are on their side. But they don’t know what’s coming.

Fighting them one on one isn’t an option so we have to be stealthy. Remaining under the radar won’t be easy, but if we pull it off, they’ll never suspect our involvement when their lives start falling apart.

Besides, they’ve already taken us to the brink of hell, what more can they really do?

Zodiac Academy: Ruthless Fae is the second book in the Supernatural Beasts and Bullies series and tells the story of the twins Tory and Darcy.

After reading the prequel and the first book in the Supernatural Beasts and Bullies series, I just knew that I was going to love every book in the series. Zodiac Academy: Ruthless Fae didn’t disappoint at all. It was such an addictive read and I couldn’t put it down. I read it in one sitting because it was just that good!

I really like Darcy and Orion together. I’m such a sucker for teacher/student romances and I like them even more when the characters are of age, like in this series. As for Tory, I’m picking Darius because he’s so secretive and sexy. It’s hard to explain it, but I’d pick him over Caleb, Seth or Max. I really like the main characters, Tory and Darcy because they’re so badass, they don’t give up and keep fighting!

Zodiac Academy: Ruthless Fae was yet another amazing book by Caroline Peckham and Susanne Valenti. The Supernatural Beasts and Bullies series is my favourite series by them so far! I cannot wait for the sequel and read more about the twins, the heirs and Orion!