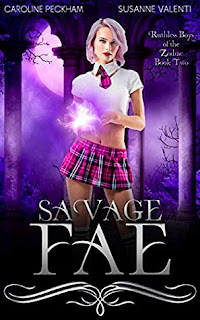 There’s more to my brother’s murder than I realised…

Shadows in the halls, mysteries lurking around every corner.

Whoever killed him is covering their tracks well.

And now I’m walking a dangerous line between getting close to the four kings for information and wanting to crawl deeper under their skin for my own desires.

I can’t trust anyone.

I can’t let my guard down.

And I must keep the urges of my body separate from my heart.

But I’m starting to break all of my own rules.

I just hope I’m not falling for my brother’s killer.

In my review of Dark Fae I mentioned that I was so excited for this spin-off series and I still am. I love that they changed it up a bit by writing Reverse Harem instead of New Adult. I just love reading about Elise and her four Kings: Dante, Gabriel, Lean and Ryder!

Elise is so badass, I love reading about her adventures. She’s such an amazing and enjoyable character, I love reading in her perspective. As for the guys, I love all of them. In the beginning I had a lot of mixed feelings about Ryder, but now I’m starting to open up to him. I also think that the deal Dante and Ryder made is absolutely hilarious!

I really loved Savage Fae, I think it’s such an amazing sequel! The book is so fast paced and well written and I didn’t expect anything less from Caroline Peckham and Susanne Valenti. They’re both amazing authors and are definitely on my ‘favourite authors’ list!