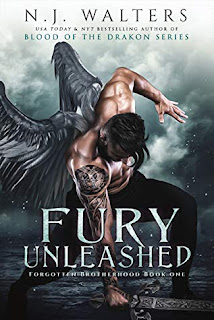 Maccus Fury, a fallen angel, is trying hard to keep his sanity. Seems being an assassin might be catching up with him. Now, Heaven, or Hell, has sent a beautiful assassin to kill him. Lovely. She’s pretending to seduce him, and he’s okay with that. She’s smart and snarky––but she has no idea what she’s walked into. And he’s more than peeved that they only sent one person. They’re going to need an army if they want him dead.

Morrigan Quill is one of Hell’s bounty hunters. She sold her soul to keep her sister safe, and now she’s working off her contract by catching bad guys and dragging them back to hell. Just a hundred years to go. When Hades makes her a new offer––that’s definitely too good to be true––she can’t say no. All she has to do is kill a powerful and crazy-hot fallen angel, who will totally kick her ass in battle.

This book was provided by the publisher in exchange for an honest review. Thank you Entangled: Amara!

Fury Unleashed is the first book in the Forgotten Brotherhood series and tells the story of Maccus and Morrigan.

What first intrigued me about this book was the cover. The dark wings and the handsome guy… I just had to know what this book was about. The story sounded so interesting and it didn’t disappoint! I really liked the story and the characters, it was such an original take on angels and demons. The only problem I had was something with the pacing. I cannot really explain it but that was the thing that bothered me a bit.

Maccus is such a mysterious character and you want to know what is going through his head. I really liked the multiple perspectives because you had the chance to read about Maccus’ thoughts. Morrigan is such a badass woman, and I love her for that. She’s fierce and a fighter, and just perfect for Maccus! They’re a match made in heaven, if you know what I mean lol.

Fury Unleashed is a good first book in a new series about angels and demons. I really liked the story and characters in general and I’m really excited for the next book in the Forgotten Brotherhood series.