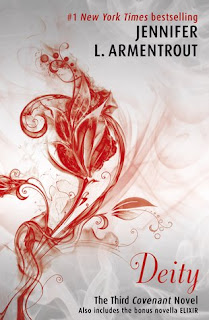 "History is on repeat, and things didn’t go so well the last time."

Alexandria isn’t sure she’s going to make it to her eighteenth birthday – to her Awakening. A long-forgotten, fanatical order is out to kill her, and if the Council ever discovers what she did in the Catskills, she’s a goner … and so is Aiden.

If that’s not freaky enough, whenever Alex and Seth spend time "training" – which really is just Seth’s code word for some up-close and personal one-on-one time – she ends up with another mark of the Apollyon, which brings her one step closer to Awakening ahead of schedule. Awesome.

But as her birthday draws near, her entire world shatters with a startling revelation and she’s caught between love and Fate. One will do anything to protect her. One has been lying to her since the beginning. Once the gods have revealed themselves, unleashing their wrath, lives will be irrevocably changed … and destroyed.

Deity is the third book in the Covenant series and tells the story of Alex, Aiden and Seth.

Sophie from Eyes of Owls, and I buddy read Half-Blood and Pure, so it’s no surprise that we buddy read Deity. She just loves these books as much as I do and I love talking to her after our 6 chapters a day. We even decided to read some more chapters the last day of our buddy read because we just had to know how the book was going to end…

… and I hated how Deity ended. I’m glad that my edition had the #3.5 short story, Elixir, because if I hadn’t had that short story, I don’t know what I would do with my life. So many crazy things happened in Deity and I’m kind of heartbroken at the moment. Even though it’s just a book, I really am invested in the word Jennifer L. Armentrout has created. The Covenant series is just so good and I love the characters!

It’s just kinda sad how much Alex’s been through. She’s such a strong character but one cannot deal with everything that is going on. My heart hurts for her, especially towards the end of the book. I don’t want to spoil anything about Aiden or Seth so I’m just going to say that a lot of things happened romantically between Alex and X and I just loved it. I couldn’t stop smiling the entire time I read about those two characters! And the necklace part? OMG!

Deity was just another amazing book by Jennifer L. Armentrout, and I cannot get this story out of my head. After I finished Deity, I’ve been thinking about the book non-stop. It’s just such a good book and I want to know what is going to happen to the characters. I need Apollyon, the fourth book, asap!