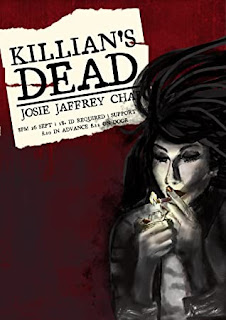 Love is for losers.
Jack doesn’t care about anything except music. All she wants to do is find a decent gig, stand by the speakers and let the bass roll through her. It’s the only reason she gets out of bed.
Until she meets Winta. In the space of a second, everything is different. Winta knows what she wants and for one night, what she wants is Jack. It feels like the start of forever.
Then Winta disappears and Jack faces a choice: should she go back to her life, or track down the only girl who can change it beyond recognition?
One things’ certain: Jack has no idea what she’s getting herself into.

Killian’s Dead is the prequel novella in the Seekers series and tells the story of Jack.

I really loved the Solis Inviciti series and the Sovereign series by Josie Jaffrey and when I heard she was writing a new series called Seekers, I was really excited!

I really like short stories but I usually like them in between books or when I’ve already read the first book in the series. I think it’s really hard to get an entire story in a short story, so I don’t always like them. I think Josie Jaffrey did a good job with Killian’s Dead because it was really interesting and I want to know more about the world she’s created for the Seekers series.

Something I also really liked was the f/f romance in this book. Josie Jaffrey is such a good author because she uses these kinds of relationships in her books, and not just the usual straight white couple ones. It’s just one of the things that make me like Josie Jaffrey’s writing even more!

I’m really looking forward to reading the first book in the Seekers series!