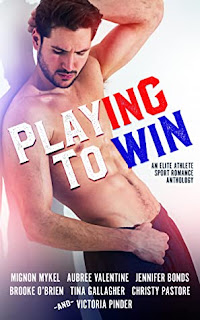 The Winning Bracket by Mignon Mykel
When the Olympics are cancelled, professional volleyball player Samantha Piper finds herself going home to Montana, but what she doesn’t expect is to fall—fast—for the former fiancé of her high school enemy. As they play alongside one another in the summer couple’s volleyball league, the stakes are high – each win has a fun, and eventually sexy, incentive. Can the final winning bracket include love?

Making the Leap by Aubree Valentine
From the outside she looks like a high-society princess. He’s no more than the family’s ranch hand. But that’s not the reason they’re bad for each other, nor is it the reason they’ve held back. Can they get past all the reasons why they couldn’t work out, and accept the real reason why they can?

Long Shot by Jennifer Bonds
Wes Kaplan is rich, entitled, and a total pain in my ass. Worse? He’s hot AF, persistent as hell, and totally off-limits. Because in a town where gossip spreads faster than pollen on the wind, the only thing worse than hooking up with your uptight boss’s son is falling for him.

Personal Foul by Brooke O’Brien
What will happen when the smooth-talking and irresistible basketball recruit sets his sights on the head coach’s daughter? The risks are high with the heat of their sexual tension mounting. Giving in to their desires is one personal foul neither of them can back down from.

Throw Like a Girl by Tina Gallagher
After knowing each other for years, Penny Montgomery and Kenny Hanover enjoyed a mild flirtation but didn’t move things beyond that. Besides the fact he’d been warned away by her overprotective big brother, she was only in town for a short visit before heading out to join the Olympic Softball Team, and Kenny wanted more than a fling. When the Olympics are canceled months later, Penny takes a well-deserved vacation at the beach and finds Kenny in town for a friend’s wedding. Still drawn to him, Penny wants to explore their attraction, she just needs to figure out how to convince him to do the same.

Double Contact by Christy Pastore
As a professional baseball player, women have never been a challenge. Until I met her. Brunette. Beautiful. Vivacious. Just as I’m ready to take my shot, my teammate jock blocks me. Turns out he saw her first. That was two years ago. As luck would have it, our paths crossed again, and this time, I don’t waste a second. I want my chance.

Fierce Fighter by Victoria Pinder
Stone Steel only has one shot to success. Wrestling. He’ll prove it in the Olympics that he’s the best. But he takes time off his training to go to his cousin’s wedding. He hadn’t expected Vanessa, his ex, to be a bridesmaid. Vanessa hopes to avoid Stone at the wedding. She never told him when he left town, she was pregnant. However weddings are intimate and Vanessa and Stone’s chemistry is off the charts. But if she tells him her secret, she’s worried he’ll never forgive her. Can she take a chance on him, this time?
Goodreads ~ Amazon
Review
This book was provided by one of the authors in exchange for an honest review. Thank you Brooke O’Brien!
Playing To Win was such a fun anthology and I really enjoyed all the short stories. I think that Playing To Win is a great anthology if you’re a lover of Sports Romance and it’s a nice way of reading short stories by authors you’ve never read before. I was only familiar with one author, namely Brooke O’Brien, but I liked reading the short stories by the other authors too.
The Winning Bracket by Mignon Mykel: 4/5
The Winning Bracket was a cute short story, and I really liked the pacing. I really liked our main characters because I loved Samantha’s personality and Sam was just so adorable. I think that this was a great short story and the main reason that I didn’t give it 5 stars was because a lot happened in this short story. That’s usually not a bad thing but I thought it was a bit too much. Besides that, the story was great!

Making the Leap by Aubree Valentine 3.5/5
I’m a sucker for the brother’s best friend trope so I couldn’t not enjoy this story! I liked the characters and the short story was cute, but it felt a bit rushed sometimes. It’s not always easy writing a short story because you want to create this big story but you have a limited number of pages. I think that Aubree Valentine did a good job with writing Making the Leap!

Long Shot by Jennifer Bonds 5/5
From the moment I read in both the characters’ POV, I knew that I was going to love this short story. Long Shot was such a good story, and it’s my favourite one in the anthology. I really loved reading about the characters and their story. I loved Skylar and Wes’ personalities and I love a good opposites attract story!

Personal Foul by Brooke O’Brien 4/5
I loved the concept of Personal Foul and I couldn’t get enough of the characters. Sydney and Rush are just so fun to read about. I love how understanding Rush was, and he’s also such a cutie! This story wasn’t just your average insta love story, but it was so much more. I really liked it and I didn’t expect anything else from Brooke O’Brien!

Throw Like a Girl by Tina Gallagher 4/5
This short story was a bit on the shorter side, but I enjoyed it nonetheless. I liked the story and the characters, they’re definitely made for each other. I liked this story but I think it would’ve been better if there were an epilogue. It would’ve been nice to know what Penny and Kenny were going to do in the future together.

Double Contact by Christy Pastore 4.5/5
Double Contact was such a good story because the characters were amazing. I loved that Brenner was a feminist, he supports strong women and we need more guys like Brenner! Lark and Brenner are so cute together and I loved reading their story. The epilogue was also so cute!


Fierce Fighter by Victoria Pinder 3/5
So I’m not the biggest fan of the secret baby trope, it’s not really my thing. On top of that, it felt like Stone easily accepted the fact that he was dad and he wasn’t angry at Vanessa at all. It’s not really realistic, in my opinion. Fierce Fighter also felt a bit rushed, and I get that short stories cannot be too long but I wish we had a few more chapters, so the story didn’t feel too rushed. But besides these points, the story about Stone and Vanessa was nice.