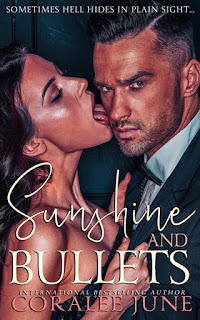 It’s a nickname I haven’t heard since I lived on Woodbury Lane, where the houses were pretty but the secrets? Deadly. It was a pet name known only to the Bullets. Rough, violent, and ruthless, they laid claim to the town – and my heart.

I wasn’t supposed to fall for a boy from the wrong side of the tracks – especially not four of them. But they were the only ones who understood that sometimes hell hides in plain sight.

I was the girl with all the conveniences a privileged upbringing could provide. The world only saw two loving parents and a pristine home life, but I knew the truth. And it was going to get me killed. So, I disappeared, from everyone and everything I’d ever known. I changed my name and my appearance, but the scars I carry, they’re still the same.

The Bullets are all grown up now, too – a crime boss, a pro fighter, a bounty hunter, and a federal agent. Life took them in different directions, but they once shared the bonds of a brotherhood forged under the harshest conditions. Together they were fearless. Brutal. Unstoppable.

I’m praying they can find that unity again. If I’m going to survive this, it’ll take everything they have. Because that’s the thing about running from the past.

Eventually, it catches up to you.
Goodreads ~ Amazon
Review
Sunshine and Bullets is the first book in The Bullets series and tells the story of Summer and her four men, Blaise, Callum, Gavriel and Ryker.
So I’ve been a big fan of the Debt of Passion Duet and I loved Looking to Score and Aggro (co-written by Carrie Gray), so I had to read The Bullets series by Coralee June. And I’m so glad I did because wow… Sunshine and Bullets was so good! The story was so addictive and I wanted to know more about Summer and her four men.
Would the Bullets miss the naive, innocent girl who lived on Woodbury Lane? Or were they content to take the new, brazen me, the girl on the run?
Summer is such a strong character, and she’s a survivor. I think it must’ve been hard for her, I cannot imagine what she’s been through. As for the men, I think Ryker is my favourite at the moment. I’m not so sure why. I also really like Blaise and Callum, but I’m not that in love with Gavriel. He has his moments, but he’s not good enough yet.
‘But the new me? She’s experienced loss and fear and pain. She has nothing to live for, so she isn’t scared to take what she wants – and she wants it all, Blaise.’
I really loved Sunshine and Bullets and I loved getting to know Summer and her four men. I loved that the chapters were divided into chapters from the present and from five years ago. That gave a good overview of what really happened and why characters acted in a certain way. I’m so glad that I started reading this trilogy and I’m also really glad that I got the box set because those cliffhangers aren’t good for me…