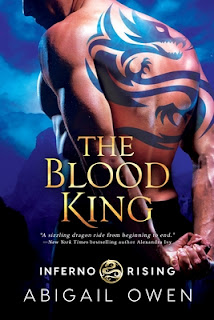 Ruthless dragon king Ladon Ormarr must keep his throne at all costs. And now, with war on the horizon, he’ll need a miracle. Luckily, the fates have dropped Skylar Amon right into his lap.

Except he may have met his match.

The feisty Amon sister has no fear – of him or any other dragon shifter – is brash, doesn’t stick to protocols, and regularly offends his warriors and advisers.

Skylar also has no intention of sticking around. She doesn’t believe in the whole destined mates thing and believes all dragon kings to be dangerous. But if it means taking out the High King who murdered her parents, she’ll put up with Ladon … temporarily.

But the fates have other plans. And when Skylar disappears in the middle of a battle, Ladon will burn down the world to find her.

This book was provided by the publisher in exchange for an honest review. Thank you Entangled: Amara!

The Blood King is the second book in the Inferno Rising series and tells the story of Skylar and Ladon.

Something that I also want to mention in this review is the story building. As I mentioned in my review of The Rogue King, I think that the Inferono Rising is such an interesting series because of all the different shifters and creatures. I like that there are different colours of dragons and they’re built differently. It’s so interesting and extra points for Abigail Owen’s story building!

The Blood King was such a well-written and addictive read and I couldn’t get enough of Skylar and Ladon. I also really loved and hated the last chapter of the book. I’m so excited to read Meira’s story. It’s going to be really interesting… I cannot wait to read the next book in the series, The Warrior King!