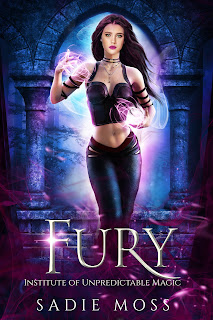 I thought my first assignment as an IUM agent was rough … but it’s not over yet.

Something strange is happening to the magical population of Portland. People are dying, and unless we can figure out what the hell is going on, more people will end up dead.

The good news is, Logan, Nick, Saint, and I made a great team on our last mission, so I know we’re up to the challenge.

But as the four of us are thrust back together to combat a mysterious magical threat, the feelings I’ve been developing for each of them become harder and harder to deny.

Is Logan right? Can we really make this work?

And will any of us live long enough for it to even matter?

Fury is the second book in the Institute of Unpredictable Magic series, a medium-burn reverse harem story featuring a nerdy, feisty chick and the three sexy men who fall in love with her.

It was so nice to get back in the world of the Academy of Unpredictable Magic series. I really loved Elliot’s story and it’s so nice that we get to read a story about another character set in the same world. I really love Rae’s story and I love the three men; Logan, Nick and Saint. Fury is already the second book in the series and I’m going to be so sad when the third one, Rogue, comes out because it will be the last one in the series. I just love Sadie Moss’ books and characters and I’m always sad when I finish one of her series.

I really love Raelyn as a character because I can totally relate to her. I can be a perfectionist too. I also really like that she’s somewhat different than the usual main character. At least, I haven’t read that many characters like her. And I love all three men. They’re so different yet so perfect for Rae. I cannot get enough of them. Especially from Saint because he communicates or shares his love through touch instead of words. I think it’s so special.

Fury was another great read by Sadie Moss, and I really enjoyed it. I finished reading this book in one day, it was just so fast paced and well written. I really loved getting to know Rae and her men a bit better and I loved seeing a glimpse of Elliot and her men in Fury. I really loved this book and I’m so excited for the next book in the series, Rogue!