A King of Beasts | Review 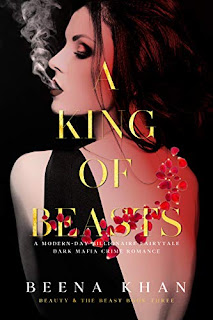 My father murdered his, so the king took me, prisoner, as his wife.

Once upon a time…
A dark King ruled New York.

I used to believe in fairy tales until one winter night, a rival mob set my world on fire. I’m Roza Ivanov, the young prized Mafia Princess of the Russian Solntsevskaya Bratva, the Pakhan’s daughter.

My happily ever after never came.

It wasn’t prince charming that came for me, but the Mad King himself. The brutal Italian’s dark beauty is violent and wicked. This is my life sentence for my father’s sins. I must atone for a debt claimed because he always collects.

The monster claims I destroyed his reality, now he challenges my sanity.

My outspoken mouth gets me in trouble, and the bruises he gives me have become too frequent on my fair flesh, leaving scars behind. The people around me look away as my innocence is shed until one stare lingers.

Bodyguards are meant to be protectors, not lovers.

He said he was a monster … but it felt like he was protecting me from shattering.
A King of Beasts deals with some hard topics such as abuse and self-harm, and I loved that Beena Khan added a trigger warning at the beginning of the book. Self-harm is sometimes a difficult topic for me, but after reading the trigger warning, I knew that I could expect some parts with self-harm. Thank you Beena Khan!
He might be a monster, but he was my monster. He was my King, and I was his Queen.
Now, let’s talk about the characters. I still hate Enzo, even after finishing this book, but there’s a small part inside of my heart that likes him. A really, really small part. I really like Roza because she’s a strong character. She suffered through so much throughout this book, and I’m so happy with Roza at the end of the book. She never stopped fighting, even though it didn’t always seem like that. She was often a bit confusing, but a lot of abuse victims are. And Kaya… I’m not going to say too much about him, but I really love him!
Roses are meant to be cherished, not crushed.
I really liked A King of Beasts because so much makes sense now. After finishing this book, I saw so many connections to the first two books. The story itself is so dark and twisted, it’s kinda hard to say that I liked it. Although it was a bit hard to get into the story, I’m happy that I didn’t give up because the ending was so worth it! I’m really looking forward to the fourth book in the series, A Beauty So Cursed!