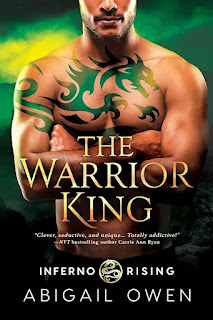 Meira Amon is the most reserved of the phoenixes, finding computers easier to deal with than people and their messy emotions. But she wants revenge against the Rotting King Pytheios for the murder of her parents just as much as her sisters. Offering herself as a queen for their ally, dragon shifter King Gorgon of the Black Clan, only makes sense.

Samael Veles worked his lowborn ass off to become the fiercest warrior of the Black Clan. He has pledged his life to protect his king at all costs. Yet somehow, in the middle of war, he took one look at a woman in a reflection and gave up his heart. When that woman turns out to be the phoenix promised to mate his king and help bring peace to their kind, he has no choice but to accept it.

Until her fire unexpectedly destroys the king after they’ve wed. Now Samael must choose between his loyalty to his clan and protecting the queen who might be his mate from his people’s wrath, one of which will unlock a destiny no one could have ever imagined…

The Warrior King is the third book in the Inferno Rising series and tells the story of Meira and Samael.

It’s been a while since I read The Blood King, the previous book in the Inferno Rising series but it wasn’t hard to pick up the story again. Once I read a few chapters I was back into the Inferno Rising world and I enjoyed every bit of it! I really liked getting to know Meira and Samael, and I loved reading about Kasia, Brand, Skylar and Ladon again!

I really love the overall story line in the Inferno Rising series. It makes you want to read all the books and discover what’s going to happen to the phoenixes and their mates. The Warrior King was another amazing book by Abigail Owen, and I think she’s a talented Paranormal Romance author. I’m really excited for the next book in the series, we’re finally getting Angelique’s story!