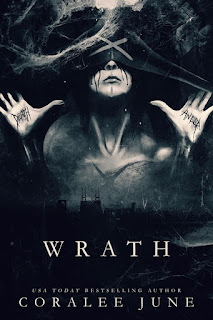 I hated fire. I hated how the smoke wrapped around my naked body, stinging my skin with defiant embers. I hated the smell of burnt flesh, the ashes heavy on my tongue, my charred soul like splinters deep in my chest.

There’s nothing else you can do –

Dragging my bleeding feet across the concrete, I walked toward the flames. Heat licked at my cheeks. Sirens off in the distance cursed my ears.

All of this started because I made a choice. Because I fell in love. Because I was a lonely girl clinging to dangerous men.

She was dead because of them.

This book was provided by the author in exchange for an honest review. Thank you Coralee June!

Wrath is the second book in the Malice Mafia series and continues the story of Juliet, Anthony, Nick and William.

When I read the news that Coralee June decided to write two more books after Malice, I was so excited. Malice was such an incredible book and after finishing it, I was so speechless. Coralee June created such an interesting world with twisted characters, and I couldn’t get enough of it. When I started reading Wrath, I couldn’t put the book down. I had to know what was going to happen to the characters and how Wrath was going to end. And that ending…

But oddly enough, my humanity died when I fell in love. It was the price I had to pay for selling my soul to three monsters.

I don’t know what goes around in Coralee June’s head, but she created some twisted characters for the Malice Mafia series. Nick and Anthony are a special kind of twisted, and I couldn’t get enough of them. William is not that twisted and is my least favourite of all three men. I really loved that this book wasn’t all roses and sunshine, but also dark, twisted, raw and honest. Wrath isn’t your average romantic story, it’s way more than that. Juliet has been through a lot and she’s trying to give all three men enough of her while the three brothers are trying to have Juliet for themselves. This book shows how hard this is for Juliet, and how much she loves them despite them being jealous and obsessive.

"You’ll have to pry her from my cold, dead hands before I let you have her all to yourself."

Wrath was such an addictive book, I finished the book in one sitting because it was just that good. This book had some dark and twisted content, and I loved every bit of it. Coralee June did such an amazing job with Wrath, and I’m so excited for the third and final book, Grudge. I love that each book is about one brother, Malice is about Nick, Wrath is about Anthony and Grudge will be about William. I’m really looking forward to Grudge and I really hope Juliet gets the happy ending she deserves!