Captive of the Dark | Review 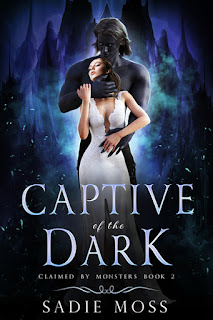 I knew my mates had dark secrets. But I never knew there was a secret lurking in my own blood.

After everything we did to try to get Donovan O’Shae off my back, one stupid mistake put me right in his crosshairs. No… scratch that. It put me in the crosshairs of his master, someone I’m 1000% sure I never want to meet.

But I probably won’t have a choice in that.

Because Donovan didn’t just capture me. He also managed to imprison the three beautiful, monstrous men who’ve come to mean more to me than anyone else in the world.

They’ve done so much to try to keep me safe. Now it’s my turn to do whatever I have to in order to protect them from this dangerous new threat.

Even if it means risking everything…

Captive of the Dark is the second book in the Claimed by Monsters series, an action-packed paranormal romance featuring a fierce woman and three damaged, sexy men.

Captive of the Dark is the second book in the Claimed by Monsters series and continues the story of Kiara and her men, Cain, North and Raven.

I really enjoyed the first book in the Claimed by Monsters series, Bound to the Dark, so I was really excited when I got my copy of Captive of the Dark! I think that Kiara’s story is really interesting and I cannot get enough of her men Cain, North and Raven. Captive of the Dark is filled with action and spice, and I couldn’t put this book down! I only did because I needed to adult, lol.

In Captive of the Dark, Kiera is finally opening up to the men and is starting to trust them. I really enjoyed reading about the change in their relationship, and seeing them grow towards each other. I like reading about these characters because although they’re going through some tough stuff, they’re still looking out for each other and enjoying their time together. I’m excited to see them grow towards each other even more in the next book!

Captive of the Dark was another great read by Sadie Moss, and I’m not even surprised. Sadie Moss is one of my favourite authors in the (Fantasy) RH genre because she always writes quick, steamy and interesting books. There hasn’t been one book by Sadie Moss that I didn’t enjoy! I really recommend checking out the Claimed by Monsters series if you’re a fan of RH, shifters and some action.