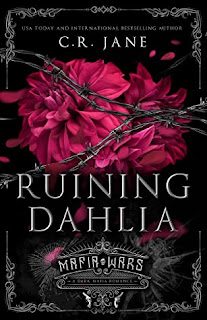 I should know all about how to survive monsters though, I come from a family of them.

We aren’t Butchers in name only, and surely the Rossi family can’t be as bad as the devil that’s been destroying me since I was eight years old.

New York City, the powerful head of the Cosa Nostra, is my new home. Where Lucian, Raphael, and Gabriel Rossi now think they own me.

The thing they don’t realize is that I’m more than what I seem.

A dahlia has always bloomed best in the light, and even though everything about this place and these men is shrouded in darkness, I’m determined to thrive … to win.

They play a game for keeps, a game where the only rule is that there are no rules.

They want to ruin me. But what disturbs me most is that I just might like it.

It’s me against them, and only time will tell If I’ll be the winner or be destroyed in these cruel and merciless Mafia Wars.

*Ruining Dahlia is a full-length reverse harem novel in the dark and twisted Mafia Wars world * Recommended 18+ due to mature language, adult situations, and sensitive content


Goodreads ~ Amazon
Review
This book was provided by the author in exchange for an honest review. Thank you C.R. Jane!

Ruining Dahlia is a standalone Mafia Romance set in the Mafia Wars world. This book tells the story of Dahlia and the Italian Mafia men.
Ruining Dahlia is the first book I’ve read by C.R. Jane, so I didn’t really know what to expect, and damn. I need to read more of her books! Ruining Dahlia was such an amazing and addictive book, I had to know what was going to happen to the characters. Ruining Dahlia is set in the Mafia Wars world, a world with 6 mafia families who promised their daughter to another mafia family to ensure peace. The concept of this ‘book series’ is so interesting, and I really liked C.R. Jane’s Italian Mafia family.
Ruining Dahlia isn’t your average Mafia Romance. This book is dark and deals with some triggering content such as sexual abuse and self-harm. So please make sure to read the trigger warnings before starting this book. I’m glad that I did because self-harm is a sensitive topic for me, so I was prepared that there were going to be scenes about it. But besides triggering content, there were also fun moments, spicy scenes and three hot Mafia brothers!
Ruining Dahlia was such an amazing book set in the Mafia Wars series, and I’m really enjoying these books! I really loved reading Dahlia’s story, and I’m so happy that I got to meet Gabriel, Lucian and Raphael. All three men are so different but perfect for Dahlia. If you’re looking for a dark yet spicy Mafia Romance, then I really recommend reading Ruining Dahlia and the other books in the Mafia Wars series!