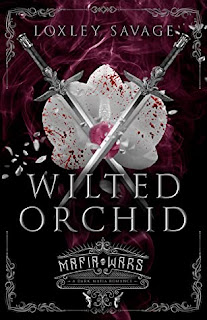 I was sold to my enemies…

Now I’m a casualty of a so-called ‘peace treaty,’ forced into the calloused, blood-stained hands of the Moretti brothers.

The handsome faces of the Outfit bosses don’t hide the monsters that lurk beneath. They claim I’m theirs, that my life was forfeited to them in a pact sealed with my dead father’s blood. But they’re not the only ones who want to own me.

When someone from my past lurks in the dark corners of my new existence, things turn from bad to worse. My cries for help are lost, buried among the chaos of the Moretti’s dark world.

My life was never mine. And now, if I don’t figure a way out of this, I’ll become the next victim of the Mafia Wars.

*Wilted Orchid is a full-length reverse harem novel in the dark and twisted Mafia Wars world * Recommended 18+ due to mature language, adult situations, and sensitive content


Goodreads ~ Amazon
Review
This book was provided by the author in exchange for an honest review. Thank you Loxley Savage!