For most of her teenage life, CeCe Edmonds has been dealing with the stares and the not-so-polite whispers that follow her around Edgelake High. So she has a large scar on her face—Harry Potter had one on his forehead and people still liked him.


Bryn asks CeCe to help her compose messages that’ll charm Emmett. CeCe isn’t sure there’s anything in his head worth charming but agrees anyway—she’s a sucker for a good romance. Unfortunately, the more messages she sends and the more they run into each other, the more she realizes there’s plenty in his head, from food to literature. Too bad Emmett seems to be falling for the wrong girl… 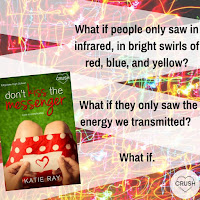 Don't Kiss the Messenger tells the story of CeCe Edmonds. CeCe had a car accident when she was younger and because of that she has a scar on her face. She's been dealing with a lot of stares and whispers about her scar, so now she's tough and doesn't back away when someone's mean to her. It looks like she's fine, but she's not. She desperately wants someone to love her for who she is, but everyone only sees her scar... Until Emmett...

I really liked Don't Kiss the Messenger. I thought it was going to be like all the other books but it wasn't. I really liked the fact that CeCe got to know Emmett while she was texting/mailing for Emmett. But I do think Emmett is kinda stupid lol. It was so obvious that Bryn wasn't the girl he thought she was.

There are also some deep conversations about beauty and scars, and I really loved that. I have scars myself and sometimes I think that's the only thing other people see, but my scars aren't the things that define me. I really loved that Katie Ray put something like this in Don't Kiss the Messenger. It's such a life lesson and thank you for that! 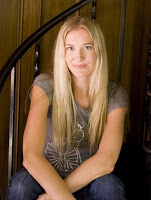 Katie Ray (also known by her previous author name, Katie Kacvinsky) writes teen and new adult fiction novels. Her books have been nominated for YALSA awards, and First Comes Love was a finalist for the Oregon Book Award. Her screenplay, A High Note, was a semifinalist in the Austin Screenplay Competition in 2015. She currently lives in Ashland, Wisconsin with her husband, two children, and a slightly insane dog.