Until You Say I Do | Release Day Blitz 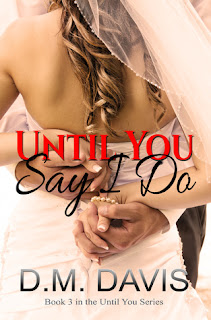 Title: Until You Say I Do
Series: Until You #3
Author: D.M. Davis
Genre: Contemporary/New Adult Romance
Release date: 18 May 2018


The Until You Series continues with Until You Say I Do.
"The first time I saw her, I knew she would be mine. Clichéd?  Yes, but that doesn’t make it any less true." Joseph
Trust is hard earned, and easily broken even for those who believe they have triumphed and now lie on the winning side of love.
Having won Samantha’s heart and trust, Joseph is determined to conquer his next challenge of making her his wife and priming her for a career at MCI. But, an old nemesis threatens the woman he loves, shaking her to her foundation and jeopardizing their very happiness.
Can Samantha see beyond the evidence and believe in the man she loves?
Will Joseph be able to prove his innocence before it's too late to say "I Do"?
Until You Say I Do is Book Three in Joseph and Samantha’s story, which began with Until You Set Me Free.
Intended for mature audiences.
Note to Reader:
You do not have to read Until You Books 1 & 2, but it would be best if you have as not all details are rehashed in this book. Plus, you will miss out on getting to know Joseph and Samantha from the beginning of their journey. It's not to be missed.

a Rafflecopter giveaway
Review
Full review Until You Set Me Free | Full review Until You Are Mine | Full review Until You Say I Do
This book was provided by the author through Give Me Books Promotions in exchange for an honest review. Thank you D.M. Davis and Give Me Book Promotions!
Until You Say I Do is the third and final book in the Until You series. Samantha and Joseph have decided to marry each other but it’s not as easy as they hoped it would be…
Until You Say I Do was again the perfect sequel to the series and was such an amazing book. I couldn’t stop reading this book, just like I had with Until You Set Me Free and Until You Are Mine.
Until You Say I Do was just the book I needed to end this series. It wasn’t only steamy but also so hard to put down because a lot of things were happening. I was so curious to know who did what and why, but I had always fate in Samantha and Joseph! They are definitely the perfect book couple!
I’m glad that I stumbled upon this series because I loved it and I devoured it. The Until You series is definitely one of the best New Adult/Romance series I’ve read so far, and I’m so happy that D.M. Davis is writing a book about two other characters from the Until You series! 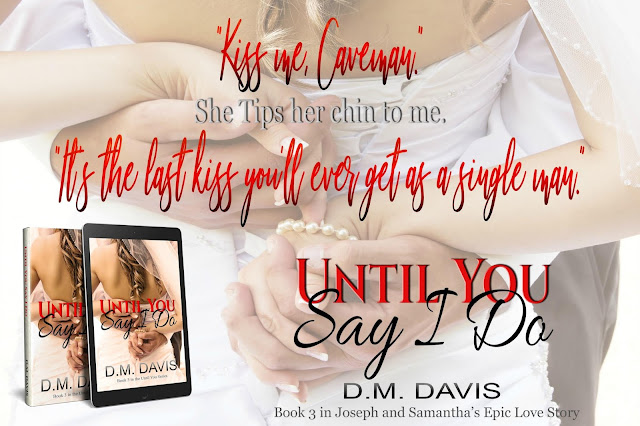 About the author
D.M. Davis is a Contemporary and New Adult Romance Author.
She is a Texas native, wife, and mother. Her background is Project Management, technical writing, and application development. D.M. has been a lifelong reader, and wrote poetry in her early life, but has found her true passion in writing about love and the intricate relationships between men and women.


She writes of broken hearts and second chances, of dreamers looking for more than they have and daring to reach for it.


D.M. believes it is never too late to make a change in your own life, to become the person you always wanted to be, but were afraid you were not worth the effort. You are worth it. Take a chance on you. You never know what’s possible if you don’t try. Believe in yourself as you believe in others, and see what life has to offer.


She is currently working on two series of romance novels: Until You and Finding Grace.