Stronger Than a Bronze Dragon | Review 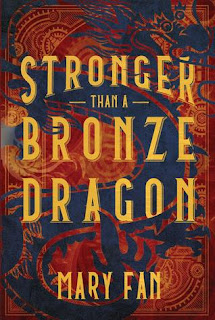 When a powerful viceroy arrives with a fleet of mechanical dragons and stops an attack on Anlei’s village, the villagers see him as a godsend. They agree to give him their sacred, enchanted River Pearl in exchange for permanent protection—if he’ll marry one of the village girls to solidify the alliance. Anlei is appalled when the viceroy selects her as a bride, but with the fate of her people at stake, she sees no choice but to consent. Anlei’s noble plans are sent into a tailspin, however, when a young thief steals the River Pearl for himself.

Knowing the viceroy won’t protect her village without the jewel, she takes matters into her own hands. But once she catches the thief, she discovers he needs the pearl just as much as she does. The two embark on an epic quest across the land and into the Courts of Hell, taking Anlei on a journey that reveals more is at stake than she could have ever imagined.

With incredibly vivid world building and fast-paced storytelling, Stronger Than a Bronze Dragon is great for readers who are looking for something fresh in epic fantasy.

This book was provided by the author in exchange for an honest review. Thank you Mary Fan!

Stronger Than a Bronze Dragon tells the story of Anlei and Tai who are both trying to save their people.

Stronger Than a Bronze Dragon is my first ever Steampunk book and I’m so glad that I gave it a try. The story was so well written, and it was so easy to read. I finished this book in a few days because I really liked the story not just because it was really original but also because it was so fast paced. I really wanted to know what was going to happen to Anlei and Tai and I wanted to discover Tai’s secrets.

The world Mary Fan’s created is really interesting and I really like the culture. I haven’t read that many books based on Asian culture, so it was really fascinating. I also really liked the characters. Anlei is so badass and I wasn’t surprised because Mary Fan’s female characters are always badass (which is something I really like). Tai was an interesting character because he had so many secrets and I really wanted to know why he was so secretive. I kind of suspected the big reveal at the end of the book, but it was still shocking!

I also want to say that I really love the cover, I mean, it’s so beautiful and the book has some beautiful illustrations. The chapters always have a little dragon and between paragraphs you have these little gears. This also something typical for Mary Fan, she always decorates her books and that’s something I really love.

Like is mentioned before, Stronger Than a Bronze Dragon was an amazing Steampunk book and I cannot wait to read more books by Mary Fan!