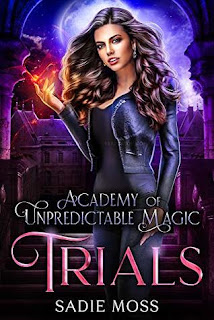 I survived my first semester at the Academy of Unpredictable Magic. Apparently, the universe took that as a challenge…

For years, Unpredictables have been brushed aside by the rest of the magical community. Now people are starting to pay attention—and I’m not entirely sure that’s a good thing.

I’ve always been content to fly under the radar, but now that we’ve been invited to participate in the Inter-academy Trials, the entire school will be in the spotlight.

As if trying to sort out my feelings for the four insanely gorgeous men who all want to date me wasn’t enough, now I’m juggling magical games, deadly plots, unexpected allies, and notoriety I never asked for.

All right, second semester. Do your worst.

Trials is the second book in the Academy of Unpredictable Magic series, a medium-burn reverse harem story intended for ages 18+, featuring a badass chick and the four sexy men who fall in love with her.

Trials is the second book in the Academy of Unpredictable Magic and continues the story of Elliot and her four men.

Trials was yet again another amazing book by Sadie Moss. I just love the way Sadie Moss creates this world with amazing characters. All of her books are fast paced, well written and just the right amount of romance and action.

The relationship between Elliot and her men has developed in Trials and it left me on the edge of my seat. I was constantly waiting for her or the men to make a move and I loved it. Now there’s still one guy I want to see in action but I guess I’ll see him in the next book.

I also think that we got to see a more vulnerable side of Elliot and of Dmitri and I really liked that. I cannot pick a favourite because I love all 4 four men but let me tell you that I’m the most intrigued by Dimitri. I still don’t know his story and I’m excited to find it out!

Trials was an amazing sequel and I cannot wait to read the third book, Thief!