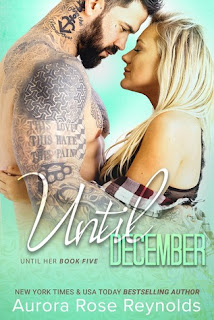 Gareth Black is drawn to December Mayson the moment he spots her across the room at her cousin’s wedding. When he approaches the beautiful woman, she captivates him with her shyness and wit, making him crave her.

With a pull so strong it’s impossible to ignore, December knows there’s something between her and Gareth. She just hopes they’re capable of jumping the hurdles ahead of them.

Two boys, an ex, a surprise that will change everything, and a disgruntled co-worker, guarantee these two will have their work cut out for them if they are going to find their happily ever after.


Until December is the second book I’ve read by Aurora Rose Reynolds and I loved it! It was such a good book and hard to put down. I devoured this book, I just couldn’t stop reading! This is the first book I’ve read in the Until Him/Her series and I’m definitely going to read the other books in the series!

I really liked December and Gareth because they’re so different from each other. December is such a sweet woman and she loves reading. Gareth is a single parent of two boys and is really badass. Even though they’re different, you can definitely tell that they belong together!
I loved the fact that the romance wasn’t the most important thing in the book. It was also important that Gareth’s sons accepted December and there was this trouble with the boy’s mum.

Until December was an amazing Romance read and I cannot wait to read more books by Aurora Rose Reynolds!