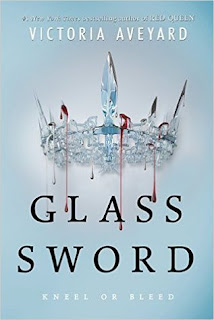 The electrifying next installment in the Red Queen series escalates the struggle between the growing rebel army and the blood-segregated world they’ve always known—and pits Mare against the darkness that has grown in her soul.

Mare Barrow’s blood is red—the color of common folk—but her Silver ability, the power to control lightning, has turned her into a weapon that the royal court tries to control. The crown calls her an impossibility, a fake, but as she makes her escape from Maven, the prince—the friend—who betrayed her, Mare uncovers something startling: she is not the only one of her kind.

Pursued by Maven, now a vindictive king, Mare sets out to find and recruit other Red-and-Silver fighters to join in the struggle against her oppressors. But Mare finds herself on a deadly path, at risk of becoming exactly the kind of monster she is trying to defeat.Will she shatter under the weight of the lives that are the cost of rebellion? Or have treachery and betrayal hardened her forever?

Glass Sword is the second book in the Red Queen series and continues the story of Mare, and is full of struggles and betrayals.


I am afraid of walking up to emptiness, to a place where my friends and family are gone and I am nothing but a single bolt of lightning in the blackness of a lonely storm.

I have to be honest and say that it’s been such a long time since I read Red Queen, the first book in the series. I read it back in 2015, and I forgot so many things. I tried to read my own review of Red Queen, some other reviews and the synopsis, and that helped a bit. I didn’t really feel like rereading Red Queen, so I just went with it and I’m glad that I did. I really missed all the characters and the story itself!

Glass Sword was such an amazing book with amazing characters, and although I did take a few days to finish the book, I loved every bit of it. The story is so interesting and I just need to know what’s going to happen to Mare, Cal and the other characters. I love that Mare isn’t your typical hero. You know that she’s struggling with who she is and she’s afraid of turning into a monster. It makes Mare a more realistic character.

Glass Sword ended with such a cliffhanger, but I should’ve known that since Red Queen ended with a cliffhanger too. Luckily I own a copy of King’s Cage and War Storm, so I don’t have to wait for the next book to arrive!