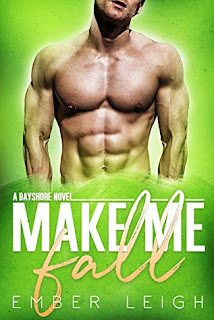 There’s one rule in my family.

Stay away from the Daly brothers.

We were raised to know them as users. Manipulators. But I only ever saw Connor as the enigmatic senior hottie who dropped into fifth period to teach us about the perils of drunk driving.

When my first big girl job out of college ends up with us working at the same company, it’s heart throb city all over again. Except he’s way ahead of the game. Successful, talented, put together. I’m just a frumpy twenty-something in a quarter life crisis who doesn’t know a glue stick from a makeup highlighter.

He would never want me, even though he’s all I ever wanted in secret. So when we cross paths one night at the bar and one drink leads to another, he slaps me with an offer I can’t refuse.

Accompany him back to Bayshore, flight included.

Pose as his girlfriend.

Our families will flip, but I’m not strong enough to say no to those baby blues, especially if it means I’ll have a chance to go on vacation with my adolescent heart throb.

We’ve got two weeks to prove we’re head over heels for each other.

Which is just enough time to make me fall.

This book was provided by the author through InkSlinger PR in exchange for an honest review. Thank you Ember Leigh and InkSlinger PR!

Make Me Fall was another amazing book by Ember Leigh. I read two other books by her this month, so I had a good reading month. I love the Breaking the Rules series by Ember Leigh and the Bayshore series is another great series. I love Ember Leigh’s writing and characters!

Make Me Fall begins with a fake relationship between Kinsley and Connor that grows into something more. I love fake relationships, it’s one of my favourite subgenres. Kinsley and Connor are just made for each other and I couldn’t stop smiling the entire time. Kinsley would be an amazing friend for me because I can see myself in her. Connor is sexy and funny, what do you want more?!

Make Me Fall was an amazing sequel and I cannot wait to read about the other Daly brothers!