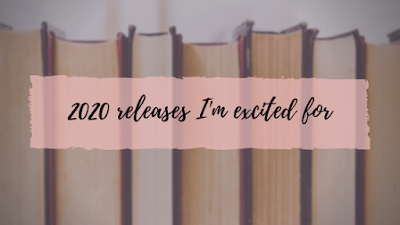 I wanted to share some love for a few of my favourite authors by sharing their 2020 releases. I'm really excited for these releases because most of them are sequels in a series!

A Heart So Fierce and Broken (Cursebreakers #2) by Brigid Kemmerer

Synopsis
Find the heir, win the crown.
The curse is finally broken, but Prince Rhen of Emberfall faces darker troubles still. Rumors circulate that he is not the true heir and that forbidden magic has been unleashed in Emberfall. Although Rhen has Harper by his side, his guardsman Grey is missing, leaving more questions than answers.

Win the crown, save the kingdom.
Rumored to be the heir, Grey has been on the run since he destroyed Lilith. He has no desire to challenge Rhen--until Karis Luran once again threatens to take Emberfall by force. Her own daughter Lia Mara sees the flaws in her mother’s violent plan, but can she convince Grey to stand against Rhen, even for the good of Emberfall?

The heart-pounding, compulsively readable saga continues as loyalties are tested and new love blooms in a kingdom on the brink of war.

Amanda Lovelace, the bestselling & award-winning author of the “Women Are Some Kind Of Magic” poetry series, presents a new companion series, “You Are Your Own Fairy Tale” the first instalment, break your glass slippers, is about overcoming those who don’t see your worth, even if that person is sometimes yourself. in the epic tale of your life, you are the most important character while everyone is but a forgotten footnote. even the prince.

Brix (A Rebels Havoc #1) by Brooke O'Brien
Synopsis
There’s a fine line between love and hate, and it’s about to be set on fire.

Brix Ward is a Grade A prick.

He's arrogant, spoiled, and self-centered. As the lead singer of A Rebels Havoc, he's used to women falling over themselves for a chance to tame the wild bad boy.

I still remember the boy I grew up with. The one who went out of his way to make my life a living hell. I did my best to avoid him at all costs.

Imagine my surprise when our parents announced they had eloped, then left me to live with my new stepbrother. Alone.

Now, no matter what I do, there's no escaping him. He's always there, tempting me, provoking me. Every moment of every day. The more we're around each other, the more the heat between us begins to rise.

If he thinks he can hurt me again, he’s dead wrong. ⠀⠀

I won’t let him be the one to destroy me, even if it breaks my heart.

Bury Me with Lies (Twin Lies #2) by S.M. Soto
No synopsis yet.
Release date: January 2020
Goodreads

Hometown Heartless by Carrie Aarons
Synopsis
One year ago, the boy next door was captured as a prisoner of war.

The boy whose window faces mine.
The backyard buddy who bandaged up my skinned knees.
The childhood crush that kept me up at night, wondering if he’d ever be my boyfriend.
The town hero I wrote endless letters to after he shipped out.
The green-eyed charmer who promised me a kiss the day I turned eighteen.

And now, he’s home.
But he didn’t come back as the boy I once knew.
He’s a man now, one with demons I can’t comprehend.
The damaged soldier keeps telling me I’m not his anymore.
That the war took him, turned him into someone unrecognizable.
What he hasn’t considered is that it took me, too.

He swears there is nothing left between us, that his heart died overseas. But with each look through our windows, we both know his lies are just that. With each fated meeting, the truth only becomes more evident.

Everett Brock occupies the shadows now.
And as much as I try to pull him into the light, it seems the switch is permanent.
What he doesn’t realize is that I’m willing to follow him into the darkness.

Synopsis
Bryce Quinlan had the perfect life—working hard all day and partying all night—until a demon murdered her closest friends, leaving her bereft, wounded, and alone. When the accused is behind bars but the crimes start up again, Bryce finds herself at the heart of the investigation. She’ll do whatever it takes to avenge their deaths.

Hunt Athalar is a notorious Fallen angel, now enslaved to the Archangels he once attempted to overthrow. His brutal skills and incredible strength have been set to one purpose—to assassinate his boss’s enemies, no questions asked. But with a demon wreaking havoc in the city, he’s offered an irresistible deal: help Bryce find the murderer, and his freedom will be within reach.

As Bryce and Hunt dig deep into Crescent City’s underbelly, they discover a dark power that threatens everything and everyone they hold dear, and they find, in each other, a blazing passion—one that could set them both free, if they’d only let it.

I Never Let You Go (I Never #3) by Stefanie Jenkins
No synopsis yet.
Release date: 30 July 2020
Goodreads

I Plan on Forever (I Never #2.5) by Stefanie Jenkins
No Synopsis yet.
Release date: 5 March 2020
Goodreads

Reckless Rebound by Brooke O'Brien
No synopsis and release date yet.
Goodreads

Against all odds, Iris has made her voice heard. Inspired by her call for freedom, sympathizers to her cause have occupied a prestigious theater in the heart of Adrye’s capital. Their demands are simple: Abolish the cruel systems that use brainwashing to force obedience upon both Earthling performers and aberrant Adryil. Recognized as the face of the movement and caught in the thick of the demonstration, Iris finds all eyes turning to her.

The authorities are determined to stamp out the nascent uprising. When new and unexpected allies arrive in time to keep the patrolmen at bay, Iris welcomes them. However, their addition sparks further unrest. Though she pleads for peace, others believe the only viable path is an all-out battle.

Divided and under siege, the movement teeters on the brink of chaos. As the situation around her rapidly spirals out of control, Iris struggles to find a way forward—before the hope for freedom falls apart.

Synopsis
Demons, murder, and a trip straight to Hell...

I thought I’d get a little time off before the veritable poop hit the fan, but fate — or rather the Fates — have other ideas. The witch who tried to have my sister possessed has escaped, and not only do I find him dead, but I don’t have a clue who he was working with. Or working for…

Now I have a Council Member in human jail, a ragtag bunch of stuffy law-abiders to lead, and a solid inkling that the next person on the chopping block is me.

All of that would be bad enough, but I’ve got bigger problems. Maria isn’t quite right after a demon almost stole her body, and I have a hunch it’s going to require a trip to Hell to get it fixed.

Time to sharpen my athames. Vacation time is over.

Synopsis
A would-be queen. A handsome young king. A perfect match…or is it?

From the #1 New York Times bestselling author of the Selection series comes The Betrothed, a glittering royal romance sure to captivate her legion of loyal readers and lovers of courtly intrigue alike.

When King Jameson declares his love for Lady Hollis Brite, Hollis is shocked—and thrilled. After all, she’s grown up at Keresken Castle, vying for the king’s attention alongside other daughters of the nobility. Capturing his heart is a dream come true.

Untitled (The Order #5) by Nikki Rae
There's no synopsis, no date and no Goodreads page but I wanted to mention this book anyway because Nikki Rae's one of my favourite authors and I've read and loved all of her books!