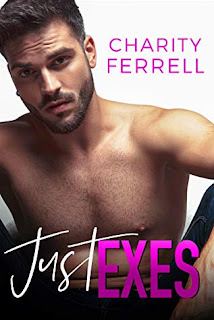 Running into an ex you haven’t seen in nearly a decade is never a good time.
Running into your ex while he’s arresting you is humiliating.

Lauren
Running into an ex you haven’t seen in nearly a decade is never a good time.
Running into your ex while he’s arresting you is humiliating.
The handcuffs close around my fists at the same time he promises to hate me until he takes his last breath.
I can’t blame him. He pleaded for me not to walk away.
He doesn’t know leaving him broke my heart as much as it did his.
It wasn’t for me. Rather, it was for someone else.

Gage
I skipped town after Hurricane Lauren obliterated my heart.
Coming home was a hard choice to make. Arresting her isn’t.
She has no idea of the demons I carry with me now. No idea that I’m a new man.
Two women ruined me.
One I gave my heart to.
The other punished me for it.

Just Exes was such a good book and yet another amazing read in the Blue Beech series. I really love second chance Romances and this one was so good. Just Exes had some epic plot twists and I couldn’t put this book down.

Just Exes is about Lauren and Gage. They’ve been together when they were younger, but they broke up. Now a few years later they see each other again and everything changes. Lauren is trying not to fall for him but Gage is making it really hard. I loved both characters and I couldn’t stop smiling when they were together!