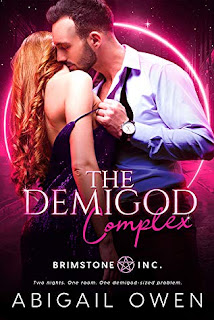 When Lyleia Naiad was head-hunted by Brimstone, Inc., for her job as Executive Assistant to a high-powered billionaire demigod, she was given one directive—do NOT fall in love with Castor Dioskouri. Doesn’t matter if he’s the son of Zeus and can electrify a room with a single glance. As an ex-nymph, she possesses a unique ability—a gift from the goddesses to protect nymphs from the randy gods—to resist her boss’s charms.

Or so she thought.

He insists she accompany him to an alpha wolf shifter mating ceremony, an event where the pheromones fly, and so do clothes … and inhibitions.

Goddesses save her, because Castor has stolen into Lyleia’s heart, and she’s not so sure she can hold out much longer…

*This novella was previously self published but has undergone a complete re-edit. Scenes were added, things were changed, but the kissing still remains!

This book was provided by the publisher in exchange for an honest review. Thank you Entangled Amara!

The Demigod Complex is the first book in the Brimstone Inc. series and tells the story of Lyleia and Castor.

The Demigod Complex is the third book I’ve read by Abigail Owen. I’ve read another book by her and another one from her pen name, Kadie Scott. I really liked those other books so it was no surprise that I really liked this book too! The story was really interesting and I like reading books with multiple paranormal characters!

I really liked the characters and I’m such a sucker for boss/assistant Romance! I just cannot get enough of it because it’s kind of forbidden but hot at the same time! I loved how protective Castor was and Leia was such a strong character. She faced some people that did her wrong but she kept looking them in the eyes. I love a strong female protagonist! And Castor and Leia are just perfect for each other. I cannot get enough of them!

I really liked The Demigod Complex, it was another amazing book by Abigail Owen! The story was well written and fast paced! I’m looking forward to the next book in the Brimstone Inc. series because it’ll be about Dahlia!