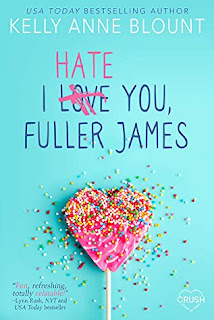 I hate you, Fuller James.

I hate your floppy hair and your lopsided grin and those laughing blue eyes that always seem to be laughing at me.

I hate that you’re the most popular guy in school and I’m still the girl who sneezed and spit out her retainer on someone at a middle school dance. It’s just such a cliché.

I hate that I’m being forced to tutor you in English and keep it a secret from everyone. Because otherwise it might put our basketball team’s chances at winning State in jeopardy, and even though I hate you, I love basketball.

I hate that it seems like you’re keeping a secret from me … and that the more time we spend together, the less I feel like I’m on solid ground. Because I’m starting to realize there’s so much more to you than meets the eye. Underneath it all, you’re real.

But what I hate most is that I really don’t hate you at all.

This book was provided by the publisher in exchange for an honest review. Thank you Entangled: Crush!

I Hate You, Fuller James is a standalone Contemporary Romance about Wren and Fuller.

I Hate You, Fuller James is the first book I’ve read by Kelly Anne Blount and won’t be the last one! I really liked this book, and it was hard to put this one down. I just wanted to know what was going to happen to the characters. This book was just so cute!

I really like that Wren isn’t just a smart girl, but also into sports. Most of the time you get either a smart girl or a sporty girl but not both. It’s also really cute how much she and her grandpa are into basketball. Fuller was kind of a jerk in the beginning of the book, but I loved how much he’s changed.

Giveaway
a Rafflecopter giveaway About the author

USA Today Bestselling author and Wattpad Star Kelly Anne Blount has more than seventy-three-thousand followers on social media. Her Wattpad stories have been read more than twenty-million times. She’s contributed to Tap, Wattpad’s new app for chat-style stories, where her work has been “tapped” more than fifty-million times. She is a writer and reviewer for SpoilerTV, which has allowed her to develop an incredible network of film and TV stars.

Two of her Wattpad works, including Captured (seventeen-million reads), have been optioned for film by Komixx Entertainment, and she is regularly invited to present seminars about social media at author events.