Make Me Yours | Review 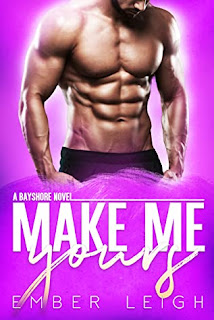 As one of the best matchmakers in the industry, I could find a rotting stump its Prince Charming.

After a bad break-up forces me to uproot and start over, I’m feeling a lot like a rotting stump in need of a spa day. So when I find my dream gig in a new city, this is a chance for me to wipe the slate sparkling clean—professionally and romantically.

But this new gig has a few problems. The biggest one being that the man I have to match off is someone I went to high school with. Not only that, he’s less Prince Charming and more King Asshole.

Varsity baseball star turned rock star cardiologist. One of the hottest guys you’ve ever seen in the flesh. But also one of the most untouchable men ever, because five minutes around this man shows me he stops for nobody.

The holier-than-thou eldest Daly brother, who is only looking for a wife-of-convenience, even though his ice-blue gaze and chiseled jaw could send a woman to the ER. Worse yet? There’s more to King Asshole than I thought. I know his perfect love match … and it looks a lot like me.

Except I’m not falling for the ‘dating in the professional pool’ trick again. So this thing between us? Just once—er, twice … nope, thrice—and done.

Even though the longer this goes on, the more I think Dom is trying to make me his.

This book was provided by the author in exchange for an honest review. Thank you Ember Leigh!

Make Me Yours was another amazing book in the Bayshore series. I really like this series and learning more about each Daly brother. The story was so fast paced, and I couldn’t stop smiling the entire time. I even started laughing out loud and that usually doesn’t happen with books. Make Me Yours was such a good book and I couldn’t get enough of London and Dom!

I really liked London and Dom. I really admire London for trying not to fall for Dom, but who wouldn’t fall for him? Dominic is just so handsome and I loved how much he tried to make London fall for him and the way he described how he was going to seduce her, damn… London and Dom are perfect for each other and I loved reading their story.

Make Me Yours was such an addictive and well-written Romance read! Ember Leigh is such an amazing author and she kills it every time! I really loved Make Me Yours and I cannot wait to read the next book in the Bayshore series, gimme the next Daly brother!!!