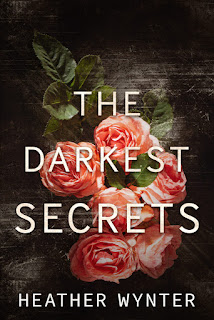 As Amelia’s investigation reveals a series of abductions and murders are related, she tries not to let her past get in the way. The deeper she digs, she discovers this case has more to do with her than she thinks.

She’s struck with her mother’s death and a mysterious flash drive she left behind. As the secrets surface and bodies stack up, her two problems are helplessly entangled with Amelia caught in their web. As she struggles to deal with her past trauma, the lines blur between victims and investigating until they’re brought together by an invisible link. A link that proves people hide the darkest secrets for a reason people will kill to keep them just that, secrets.

The Darkest Secrets is a standalone Thriller about Amelia and some dark secrets.

What first caught my attention was the beautiful cover. I was going through my Xpresso Book Tours mail for some interesting blog tours and review copies, and when I saw the cover, I had to know what this book was about. The synopsis sounded really promising, and I was really excited to read this book.

When I started reading The Darkest Secrets, I was so irritated with the main character, Amelia. I just didn’t enjoy reading in her perspective because she was so annoying and there were two people that wanted to help her, two people that she could trust and she was always mean to them. We also got to read a few chapters in Emma’s perspective and she was annoying too, just like Amelia.

The story of The Darkest Secrets was good in general, I liked the concept, but the characters made this book so hard to read. This book was so slow paced and I had to push myself to finish this book. If it hadn’t been an arc, I wouldn’t have finished it…