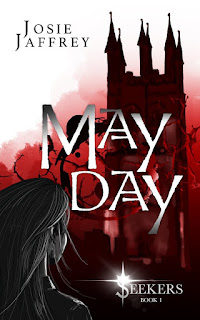 If the murderer you’re tracking is a vampire, then you want a vampire detective.
Just maybe not this one.

When a human turns up dead on May Morning, she’s determined to pin the murder on Drake. The problem is that none of the evidence points to him. Instead, it leads Jack into a web of conspiracy involving the most powerful people in the country, people to whom Jack has no access. But she knows someone who does.

To get to the truth, Jack will have to partner up with her worst enemy. As long as she can keep her cool, Drake will point her to the ringleaders, she’ll find the murderer and no one else will have to die.


Goodreads ~ Amazon
Review
This book was provided by the author in exchange for an honest review. Thank you Josie Jaffrey!
May Day is the first book in the Seekers series and tells the story of Jack Valentine.
I remember enjoying the prequel novella in the Seekers series, so I was really excited to start the first book in the series, May Day. I’ve always been a fan of Josie Jaffrey’s writing and story building, and May Day didn’t disappoint! I really liked that this series was set in the same world as the Solis Invicti and the Sovereign series. Both series were amazing, so it was nice to read about that world again.
As I mentioned in my review of the prequel novella, Killian’s Dead, I love that Josie Jaffrey writes about LGBT+/POC characters. Jack is such a badass bisexual vampire, and I’m here for it! I’m also a big fan of Killian even though he can be an ass too. I hope Jack and Killian will end up together but I don’t really see that happening soon.
May Day was a good Urban Fantasy read and I also really liked the mystery aspect. I really wanted to know the murderer and whether or not the Solis Invicti were responsible for certain things… I really liked reading May Day and I’m looking forward to reading the next book in the Seekers series!