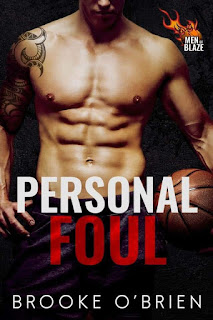 Sydney Carr knows better than to mix business with pleasure. She’s had a long, hard road to get to where she is now. She landed her dream job, and she’s not about to risk it all for the newest basketball recruit.

The stakes are high for Colson Rush. When he’s traded to the Miami Blaze, his focus is on one thing – winning. But when he helps a fiery redhead fight off a mugger, he can’t deny the sparks between them. Although she tries, neither can she.

Giving into the temptation is one personal foul neither of them can back down from.

Personal Foul was previously featured in the Playing to Win Anthology and is now expanded to a full-length novel.

This book was provided by the author in exchange for an honest review. Thank you Brooke O’Brien!

Personal Foul is the first book in the Men of Blaze series and tells the story of Sydney and Colson. This book was previously published as a short story and is now a full-length book.

"We have a no-trade clause, which means you’re stuck with me on your team. I’m your forever date now."

It was so nice to read about Sydney and Colson again. I really liked the characters in the short story, and they were even better in the full-length version. I loved getting to know them better and I love the new things Brooke O’Brien added to the story. Sydney is just such an amazing character, and Colson is such a cutie.

"You’re one personal foul I’ll never back down from."

Personal Foul was such a good and addictive read. It’s so fun to read about Sydney and Colson, they’re just so perfect for each other and it makes you smile. I really recommend Personal Foul if you’re looking for a quick and great Sports Romance read. PS: I also really liked the bonus epilogue!