A Beauty So Cruel | Review 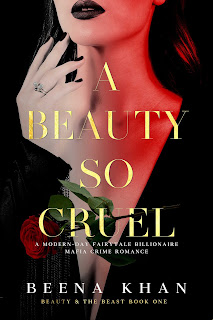 I was a beauty, a stray orphan until the beast took me as his hostage.
Once upon a time…
A Don by the name of Vlad Vitalli ruled New York. He’s a mafia man. The leader of one of the ruling families, La Cosa Nostra. He’s a monster. A trained killer and a cold-blooded murderer. Tall, mysterious, with icy gray eyes, and he rarely smiles. He’s a criminal. Ruthless, cold, dangerous, and is going to kill me.

I was the wrong person at the wrong time.
An innocent at the masquerade ball but I witnessed a murder. The mafia has rules: no witnesses left behind. To save my life, I made a deal with the beast. I handed myself to the cruellest man in the kingdom.

For him, it was supposed to be an easy kill. I’m an orphan raised in poverty. Just as Don Vlad was about to order the hit, I threw off my masquerade mask, revealing my face, and offered myself to him. One look and I was doomed. He took me as his hostage. His captive. He didn’t know by taking me, Dahlia Hadid, he sealed his own fate.

Welcome to New York’s Underworld.
Loosely based on the fairytale.


Goodreads ~ Amazon
Review
This book was provided by the author through Give Me Books Promotions in exchange for an honest review. Thank you Beena Khan and Give Me Books Promotions!
A Beauty So Cruel is the first book in the Beauty & The Beast series and tells the story of Dahlia and Vlad.
He was the beast who I shouldn’t want, but I wanted to be consumed by him.

A Beauty So Cruel is the first book I’ve read by Beena Khan and I’m so excited to check out her other books. I really enjoyed reading A Beauty So Cruel, it was so interesting and addictive. It was hard to put this book down because I had to know what was going to happen to the characters. And let’s not forget the ending. I WAS SO SHOCKED. I didn’t see it coming at all and I’ve been thinking about the ending for a while now. I’m still not over it… It was one of the biggest plot twists ever.
He might be the beast, the monster, the enemy, but right now, he was all that I wanted.
So when I started reading this book, I was really happy that the author included a little trigger warning at the beginning of the book. This book deals with some topics such as abuse, bullying, and rape. I’m really glad that she included a trigger warning because it can be triggering for some people. From the minute I read about Dahlia and Vlad, I liked both of them. Dahlia is such a strong character, she’s been through a lot. I also loved her sass. Vlad isn’t your typical mafia boss, in my opinion, but I liked that about him. He was also a bit cocky in the beginning and that made me laugh so much.
I am a beauty so cruel. He was my ruin. My reckoning. My utter destruction.
A Beauty So Cruel was such a good read with a plot twist that I didn’t see coming. I love these epic plot twists that make you question the entire book and the characters. I really like Beauty and the Beast retellings and I think Beena Khan did a great job. This book is insane, and it talks about some important topics such as rape, abuse, foster care, etc. I was really mind blown by this book and I highly recommend reading A Beauty So Cruel! I cannot wait to read the second book in the Beauty & The Beast series!