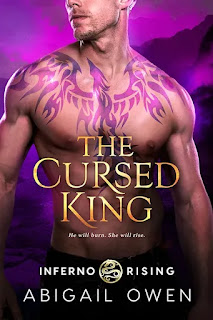 He will burn. She will rise.

Airk Azdajah, the rightful King of the White Clan, spent half a millennium being tortured by the false High King Pytheios. The only reason he’s alive is a curse— the man to kill Airk will be consumed in his own fire. Which is why Pytheios kept Airk alive, barely, unable to shift in his prison cage, driving the creature half of him into madness. Airk escaped, but he’ll never be truly free. What good is a king who can never let his feral dragon loose, never fly, and never lead his people? He’s better off dead.

Angelika Amon is the last unmated phoenix. The problem? She has no powers. Zip. Zilch. Angelika hates being dormant, especially now that her three sisters are blissfully mated to powerful dragon shifter kings and are very much part of the fight to take down the rotting king Pytheios, their parents’ killer. What good is a useless runt of a phoenix in a battle to save the dragon kingdom?

Desperate to find some way to help, she offers herself to Airk as a mate — just for political leverage. But a dormant phoenix is no damn use to him just like a dragon who can’t shift is no use to her. Until Pytheios sets his sights on Angelika for himself…

This book was provided by the author in exchange for an honest review. Thank you Entangled: Amara!

The Cursed King is the fourth and final book in the Inferno Rising series and tells the story of Angelika and Airk.

I’m so happy that we finally have Angelika’s story. Ever since the beginning, I’ve always been interested in the fourth sister, and I loved her story. The Cursed King was another amazing, fast-paced and well-written book by Abigail Owen. I really love her writing style, her world builing and her amazing characters. It’s no surprise that I enjoyed reading this book because all the other books in the Inferno Rising series were amazing too.

Angelika has never seemed 'special' like her sisters and I kind of liked that about her. It made her special in her own way. Airk is an interesting character. He’s been through a lot and he doesn’t see himself together with Angelika because of what he’s been through. I really loved their story because it was not just about love but also about fighting your fears and fighting for what you want. I loved seeing Angelika and Airk grown towards each other.